The Lib Dems in Europe 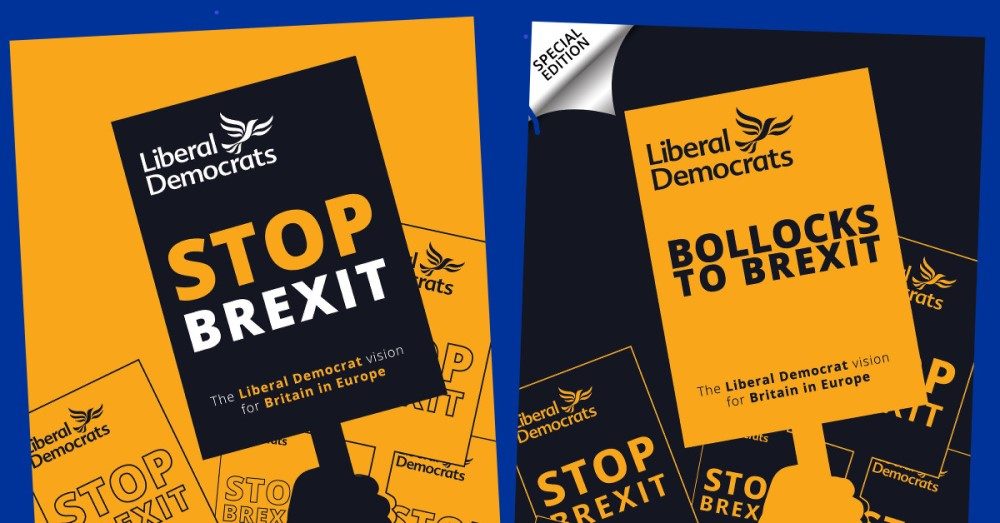 The Lib Dems believe that Britain is stronger as part of the European Union and have led the fight to give the people the final say on the Brexit deal.

The Lib Dem vision is Britain remains at the dynamic heart of the European Union. The party believes that Britain should be a country of high-quality health and social care, good-quality childcare, lifelong education, reliable transport and clean air.

The importance of the UK’s membership of the EU has never been clearer after three years of the Brexit mess created by the Conservatives. Leaving the EU puts so much at risk- the NHS, public services, jobs across the country, peace in Northern Ireland, international reputation and the unity of the UK itself.

There is still hope- Lib Dem MEPs are fighting to Stop Brexit through a People’s Vote to stay as a leading force in the EU.

The Lib Dems vision for Europe is one built on freedom, democracy, business, prosperity and sustainability. Liberal Democrats support a Europe anchored in the four freedoms of movement of people, goods, services and capital.

A Liberal Europe is one that supports human rights to all, the rule of law and open democracy. Liberal Democrats fully support the individual. In Europe, individuals should be able to pursue their own talents, potential and the right to make their own life choices.

In the 20th Century, Europe was a continent divided by walls and trenches. But in recent decades, those barriers that once divided Europe that been broken through cooperation and integration. The Lib Dems believe in our continued partnership with Europe. The EU is a positive ideal for many around the world and an example to follow.

Liberal Democrat MEPs champion European values, working together with like-minded Liberals from other member states in the Renew Europe group.

Britain and the UK are suffering from a paralysis of anti-liberal, populist and nationalist forces who threaten the values of Europe.

Populists wish to remove liberal values from the EU. They claim to protect freedoms, security and speak for the people. Instead, they limit freedom, make Europe unsafe and attack individuals that do not adhere to their opinion.

Liberal Democrat MEPs have always been progressive reformers in the European Parliament. The Lib Dems want to be part of Europe that can adapt to the changing realities of the 21st Century. Liberal MEPs will always challenge and confront the populist forces that threaten the UK’s position in Europe and European values that allow us to live in peace and prosperity.

The Lib Dems cherish the principle of freedom of movement. UK citizens currently enjoy the opportunity to travel, work, live and be connected to loved ones in the EU with no restrictions- Brexit threatens this.

Populists and nationalists have argued that EU membership has brought uncontrollable levels of immigration into the UK. This is not the case- the current deal the UK has allows for control of borders with the relevant checks and the ability to refuse entry to criminals and other individuals that could be a danger to national security.

EU citizens make an enormous contribution to the UK. Around 63,000 currently work in the NHS in England and 104.000 work in the adult social care sector. Ten percent of the NHS’s doctors and seven per cent of nurses are from the EU- Brexit will add to the current NHS staffing crisis. In schools, 13,000 teachers are EU citizens- these individuals enrich British children’s education.

Education, health and opportunities for all:

Being a member of the EU has allowed for UK universities to receive around £730 million a year from the EU to spend on research. Additionally, it means that leading academics from the EU can easily access UK universities. The Erasmus scheme also allows for UK students to study and live elsewhere in the EU. In turn, other EU students have come to the UK exchanging cultures, broadening horizons and fostering new relations.

EU membership also significantly benefits the health and well-being of UK citizens. The EU provides significant funding for research into cures for diseases and gives the UK access to cutting-edge treatments to be able to use in the NHS. The European Health Insurance Card means UK citizens have access to medical treatment in all member states of the EU- this has been essential for travellers and holidaymakers.

Liberal Democrat MEPs will continue to work on behalf of students by pushing to get more qualifications recognised in other member states. Lib Dem MEPs will also fight for UK citizens to continue to access the health benefits that the EU provides.

Working together to tackle the climate emergency:

Cooperation with the EU is now more important than ever to tackle the global climate change emergency. Being an EU member, add significant weight to the UK’s to the international negotiations in establishing high environmental standards. The EU led in the establishing the 2015 Paris Agreement- which includes accelerating the deployment of low-emission technologies, infrastructure, vehicles and products.

Liberal Democrat MEPs are renewing calls for a zero-carbon Britain by 2045 and a zero-carbon EU by 2050. Lib Dems are also calling for an EU-wide ban on fracking and are addressing other environmental issues such as the use of plastics. Lib Dem MEPs believe that working together is the only way to tackle the climate emergency.

Innovation that benefits and unites us:

In the digital age, it is vital that we all have access to the internet for equal opportunities. A Liberal Europe is one with no virtual borders. The EU has abolished mobile phone roaming charges and restricted ‘geo-blocking’ which means British shoppers are able to buy goods and services from websites across the EU.

Liberal Democrat MEPs want the UK to take full advantage of the technological opportunities that the EU provides. Lib Dems want to encourage competition among companies in the digital space whilst emphasising the importance of competition powers to ensure tech giants do not exploit consumers.

Equal treatment for all in Europe:

Across the EU, significant progress has been made for achieving equality for women, ethnic minorities, disabled people and LGBT+ people. However, there are still challenges to overcome and the Lib Dems are committed to directly confronting the challenge of hostility and hate crimes. Brexit has caused a spike in the number of hate crimes reported in the UK- the Lib Dems have been saying that this is unacceptable.

The EU has set a minimum standard for the protection against discrimination on the grounds of gender, gender identity, race, disability and sexuality. Any EU member state that violates these protections must face sanctions. Lib Dems in Europe are calling for all EU members for ratify the Istanbul Convention which aims to combat violent and sexual harassment against women.

Liberal Democrat MEPs strongly oppose any form of racism, division of societies and hatred against human beings. Lib Dems are committed to promoting gender equality and empowering women and girls, to have the same rights and equal opportunities in all aspects of society.

UK leading through the EU:

Britain’s input into foreign affairs is greatly amplified because of membership of the EU. The UK has significantly contributed to EU policies on security, the environment, trade and human rights. The Lib Dems wish to see an EU that acts collectively, changing the geo-political environment by enhancing the EU’s economic and normative powers.

In an era of global unpredictability, it is in the UK’s interest to work with our EU partners. With strained national defence budgets and Donald Trump’s US less willing to contribute to Western defence, deeper cooperation is vital to maintain the EU’s and national security interests.

Liberal Democrat MEPs condemn the continued occupation of Crimea by Russia and call for greater EU support for the democratically elected administration of Ukraine. Lib Dems believe that the EU must continue to play its role in international development cooperation. Lib Dem MEPs have also shown leadership on development by securing the UK’s legal commitment to devote 0.7% of national income to development aid.

EU membership means the UK police are better able to keep us safe. Brexit threatens the UK national security by not having access to the European Arrest Warrant (EAW) which allows for criminals who travel across borders to be brought to justice. Ensuring the safety of British people is the priority of the UK government and the Lib Dems will continue to work closely with European partners to prevent terrorism, including through Europol and other intelligence-sharing arrangements.

Liberal Democrat MEPs want the UK to stay IN the EU to protect our national security through the European Arrest Warrant and intelligence sharing via Europol.

Investing for the future: innovation, agriculture and regional development:

The EU is vital organisation in providing funding for research and promoting a culture of research collaboration throughout Europe. Research projects such as Horizon 2020 has allowed UK scientists to tackle climate change, protect food supplies and improving health and well-being.

Liberal Democrats MEPs continue to support the EU’s innovation, agriculture and regional development schemes. Lib Dems will continue to defend and maintain Britain’s fishing industry by ensuring that fishing rights are not traded against each other. Even if Brexit is stopped, the Liberal Democrats pledge £7.5 billion to an emergency Brexit Support Fund to those who have lost jobs and businesses that have been forced to close because of Brexit.

Also in this section...