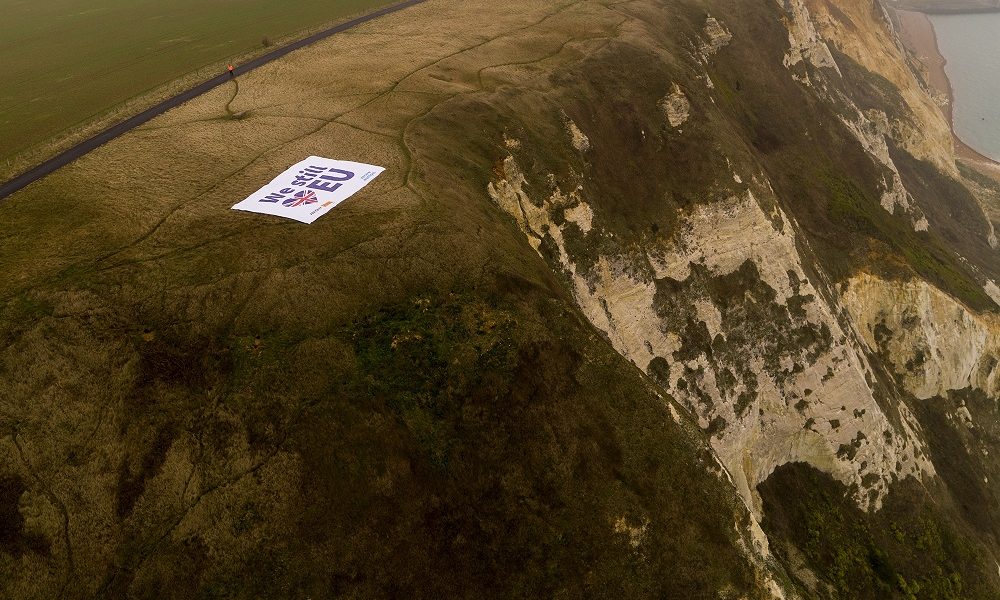 A Liberal Democrat MEP has displayed a gigantic pro-European banner on top of the White Cliffs of Dover – and senior European politicians love it.

Antony Hook, an MEP for the South East, revealed the banner – which has a footprint of 150 square metres – at Abbot’s Cliff, Dover, on Friday morning.

Drone footage of the banner, which displays the message ‘We Still Love EU’, circulated on social media, and attracted enthusiastic responses from leading figures within the European Union.

Guy Verhofstadt, the European Parliament’s chief Brexit negotiator, shared the footage on his Facebook page under the message ‘We love you too!’, accompanied by pictures of the EU and UK flags.

Shortly after the footage began to circulate, Donald Tusk, the former President of the European Council, tweeted a ‘We Still Love You’ message also containing EU and UK flags.

The display was funded by contributions from over 800 members of the general public.

Antony Hook said: ‘The overwhelmingly positive response to our banner, from both the public and politicians, demonstrates the affection that exists between Britain and the 27 EU member states.

‘I am delighted that through this project we have been able to show that, despite Brexit, the spirit of warmth, goodwill and cooperation that we have fostered through our involvement in European institutions since the 1970s lives on.

‘I know that many people will be relieved to see an encouraging and enthusiastic response to our message from such prominent and popular European politicians, and hope it bodes well for our future relationship.

‘We are using the money raised through our Crowdfunder to deliver another exciting project that promotes our message of hope for a positive relationship in the future.’

More photos of the event are available on Flickr.com